EIGSI, Engineering School, has a rich history dating back more than 110 years, combining academics, tradition, innovation and human adventure. Founded in 1901 in Paris, EIGSI is one of France’s oldest private engineering schools.  Since its foundation, it has graduated more than 8000 engineers.

EIGSI was started in 1901 originally called EEMI, the School of Industrial Electricity and Mechanics. EEMI quickly emerged as a leading engineering school in electrical and mechanical engineering. At the beginning of the 20th century, during the second industrial revolution, electrical and mechanical engineering (aerospace, automotive, industrial) were two fast-growing fields. EEMI was known as an innovation centre, training creative, innovative engineers at the forefront of technical and scientific progress.

The first graduates of the school included modern-day adventurers who, driven by their passion for engineering, embarked on the exciting new adventure of aviation. Géo Chavez, a student of Peruvian origin, beat two records in a row in 1910: the highest altitude ever flown (2,652 meters) and the air crossing of the Alps. And Roger Baptiste, a test pilot in the 1930s, flew many prototype flights.

From Paris to La Rochelle

EEMI lost many men during the two world wars, but continued to grow and achieve great fame under the name of Ecole Violet, due to its location on rue Violet in Paris.

In 1990, EEMI became EIGSI and moved to La Rochelle. A new place, a new campus and a new challenge for this celebrated general engineering school. 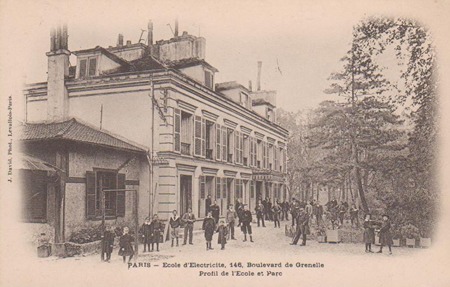